Truck Technology and Safe Habits Over the Long Haul

The red seatbelts that come standard on all FUSO’s 2018 FE DIESEL and 2019 FE GAS models look sharp and snazzy.

More than a fashion statement, the bright seatbelts are a visible reminder of the importance of buckling up every time you drive or ride in a truck.

We hope that fastening a seatbelt is an instinctive reaction, a practice to ensure as safe a ride as possible. It might seem simplistic, but seatbelts only work when you use them.

In 2017, in 38 percent of fatal accidents involving truck occupants, the people who died did not buckle their seatbelts, according to the Federal Motor Carrier Safety Administration (FMCSA).

That is more than one-third of fatalities. In human terms, that translates to 319 drivers or teammates in that year alone, folks who will never return to their families, their communities, and the jobs they loved.

While seatbelts don’t involve a lot of high-end technology, the Mobileye collision avoidance system offers the latest advances in preventing crashes from ever happening. That’s why Mobileye is the leading provider of collision avoidance technology to the majority of the world’s auto manufacturers, equipping more than 15 million vehicles. In testing at FUSO, Mobileye is proven to reduce hazardous driving behavior by 50 percent. 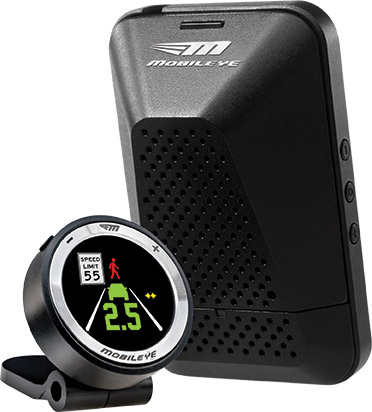 An optional feature offered by FUSO, the system is standard on the 2017 FE DIESEL trucks as an introduction promotion.

Here’s how it works. The system analyzes the risk factors in accident. When a threat is detected, Mobileye immediately warns the driver with visual and audible alerts. This real-time warning allows drivers with time to react, correct, and possibly avoid a collision.

Rear-end collisions are one of the most common accidents caused by inattentive drivers. Mobileye continuously scans the road in front of the vehicle and alerts the driver to an imminent rear-end collision with a car, truck, or motorcycle.

Unintended lane departure is the leading cause of serious accidents, according to statistics. Mobileye detects lane markings and alerts the driver if the vehicle leaves the lane without the use of a turn signal.

Many drivers underestimate how close they are to the vehicle ahead, and don’t have enough time to react to a problem. Mobileye displays the time, in seconds, to the vehicle in front. The system issues a warning when that time becomes unsafe.

Pedestrians and cyclists are the most vulnerable road users because they don’t have a vehicle to protect them. Mobileye alerts the driver of an imminent collision with a pedestrian or cyclist during daylight hours.

The idea behind advanced technology and good driver habits is to save lives, first and foremost. Avoiding collisions also saves companies money in repairs and lost time after an accident.

An article in FleetOwner encourages a hands-on approach to truck safety. That includes a reminder that federal law forbids drivers to hold a mobile device while operating a commercial vehicle. Still, distractions from cellphones are among the top five factors in accidents involving large trucks, according to the FMCSA.

What about hands-free phones? The only legal devices are those that can be activated by pushing one button. Not two. Not three. Just one.

Other insights from the article:

5 Things You Didn’t (But Should) Know About Truck Financing*